The interest in complex chemistry plasmas is increasing rapidly during the last decade. This is among others boosted by the booming attention paid to plasmas for biomedical applications and environmental technology. In all these modern applications the classical atomic plasma composed of one single noble gas species is replaced by plasmas created in rich chemical fillings. As a consequence of plasma activities these filling are transformed into a myriad of excited atoms, molecules, radicals and various types of ions.

A spatially resolved plasma model containing a large amount of species and reactions is a challenge with respect to its computational demand. Therefore, the employment of a global model is favourable, since it allows for time resolved calculations while still being manageable when it comes to the required computational effort.

The PLASIMO Global Model plugin calculates the densities of species and reaction rates of processes between these species, as function of time. Additionally, the electron energy density balance is solved. Apart from defining a chemistry, i.e., a set of species and their properties, and reactions occuring between these species, the user can define any form of time dependent input power. The reactions are processes that take place in the bulk of the plasma, not involving, in any way, any interaction with the surroundings. However, in many cases the user will want to create a plasma model that does account for certain processes involving something outside the chosen volume. Examples are processes like diffusion, flow, wall recombination and sputtering. Essentially these are processes that represent some sort of transport into or out of the volume. For including processes falling in the last category extra functionality is provided by the plugin.

Some of the succesfull aplications of PLASIMO's Global Model are listed below.

This simple argon model is inspired by a model by S.Ashida etal.. The Model calculates the densities of species and reaction rates of processes between these species, as a function of time in a cylindrical geometry, power modulated microwave plasma.

The model generates a graph for all the species and reactions relations. On the figure below, the squares represent reactions, while circles represent species. The red arrows represent loss of particles, and the green arrow - production. The stoichiometry coefficient is indicated on the arrow. 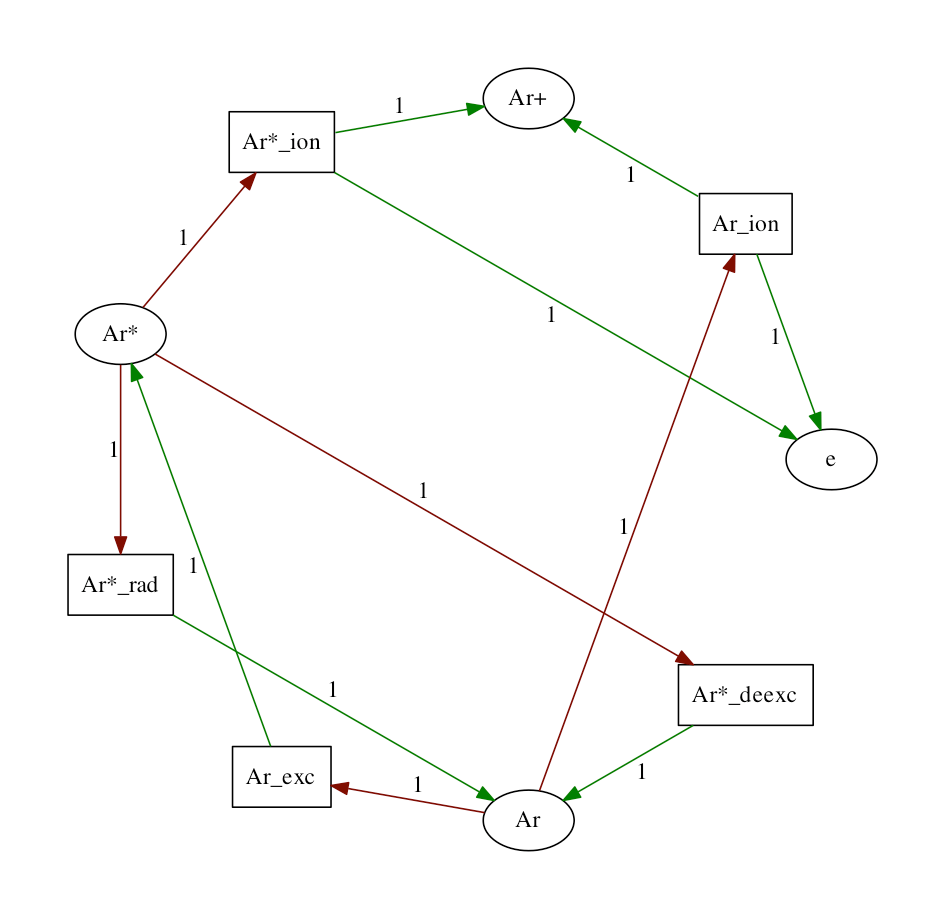 PLASIMO Global model is used to study the chemical processes in a microwave induced plasma that is confined inside a cylindical resonator. The gas mixture is either pure O2 or a O2-SiCl4 mixture. The model includes 40 species participating in 175 reactions.

More information about the model can be found in chapter 5 of the PhD thesis of Efe Kemaneci [bib | read article]. 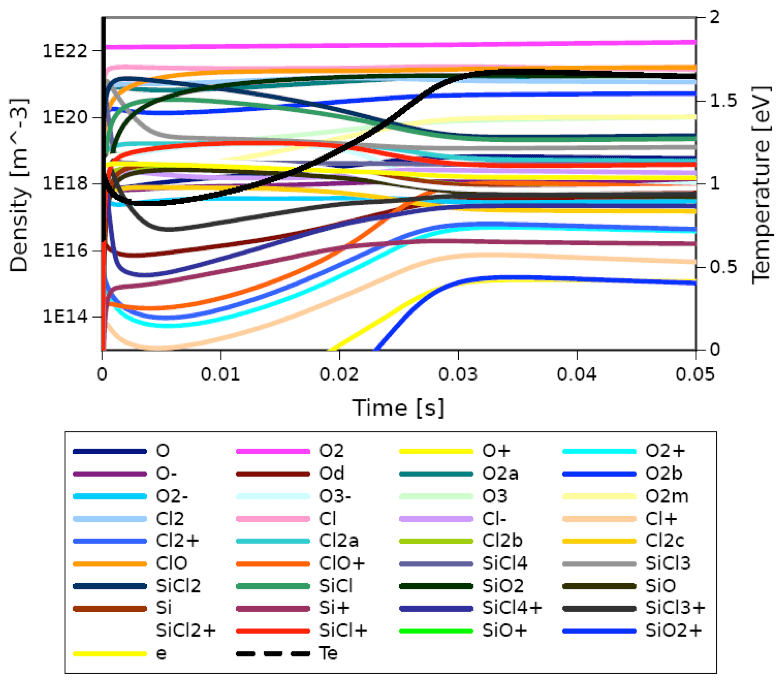 PLASIMO Global model is used to study an inductively coupled radio-frequency chlorine plasma, both in continuous and square wave modulated power input modes, and the results are compared to experimental data from literature [bib | read article]. The model consists of 12 species and 39 reactions. Below, one of the results is presented, showing a comparison between model results and experimental results for a single pulse. 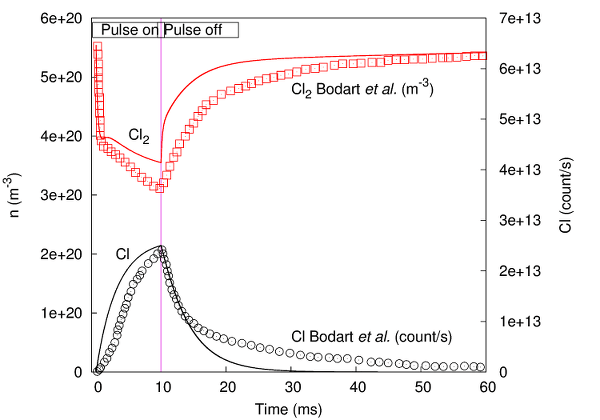 For studying a microwave induced oxygen plasma at intermediate pressure the PLASIMO Global model is used to simulate the time resolved behaviour (in combination with other PLASIMO modules for creating a self-consistent spatially resolved model of the same plasma) [bib | read article]. The model consists of 15 species and 89 reactions, and the results are also compared to experimental results from literature. An example of the results is shown below. 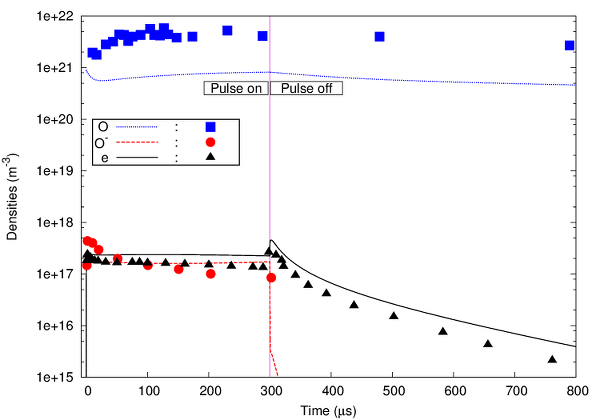 In recent decades, concerns about climate change have sparked interest into reducing CO2 emissions. Combined with diminishing fossil fuel reserves, demand for alternative forms of energy is on the rise in society and general industry. However, many forms of alternative energy depend on nature and therefore fail to deliver consistently and reliably.

Both problems can be tackled simultaneously by converting CO2 into fuels that can directly replace fossil fuels. One mechanism for achieving this is plasma assisted CO2 conversion. The aim is to use a plasma source to convert CO2 into CO, which can then be converted in for example methanol in subsequent processes.

For this particular application several plasma sources are under investigation, and an important part of this research is modelling. However, the presence of multiple molecules with many different excited states (most notably vibrational) in this kind of plasma, makes the chemistry quite complex and therefore hard to model.

The goal of this research is to investigate the CO2 chemistry, and to determine the main reaction paths and species. The aim is to also investigate the applicability of advanced reduction techniques such as Intrinsic Low Dimensional Manifold (ILDM) and Principal Component Analysis (PCA). The knowledge gained can be used to implement a reduced but accurate chemistry in spatially resolved models.

The species relation map is given below. 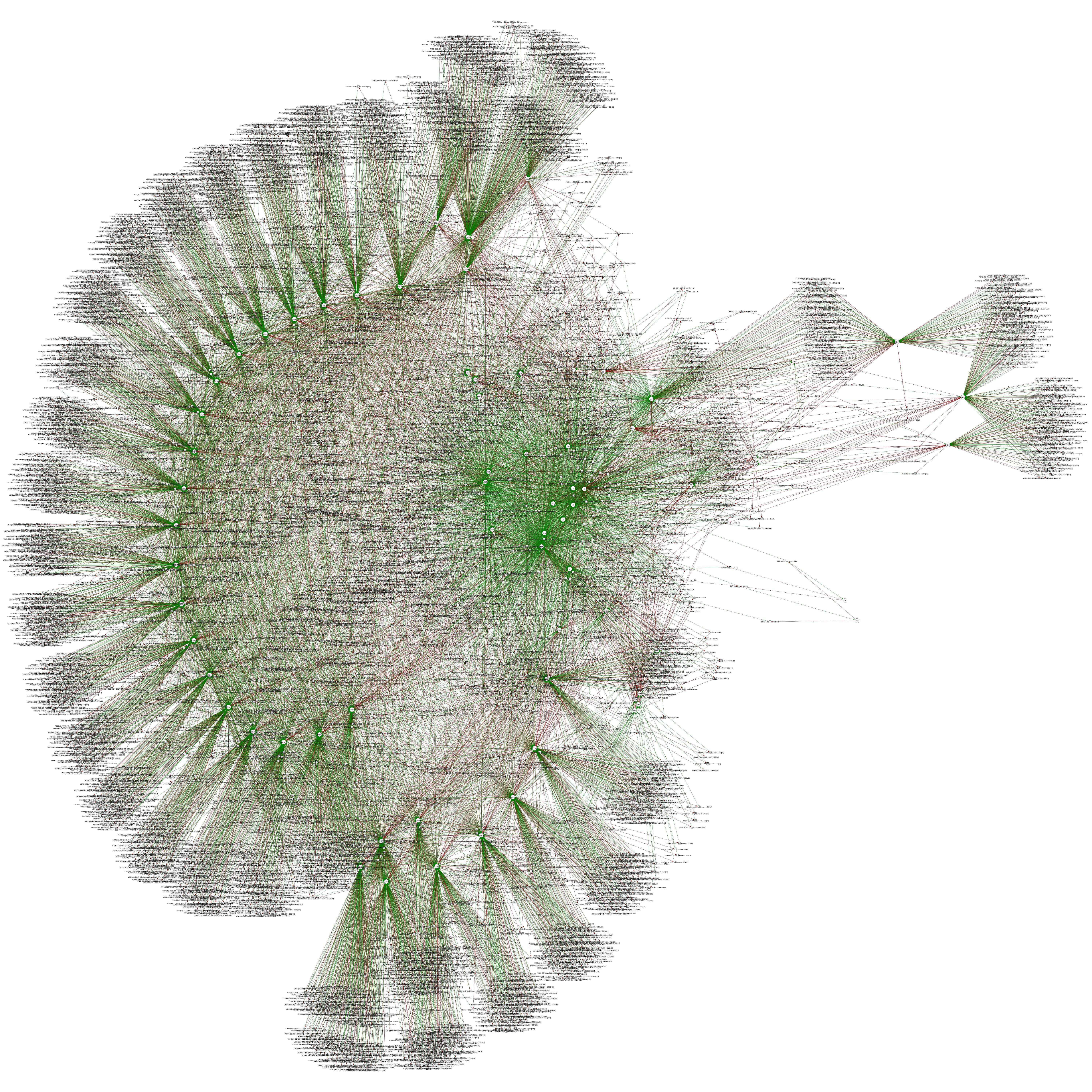 Evidently, the chemistry is quite complex, and any spatially resolved modelling is hardly feasible. Reducing this chemistry to an accurate lean representation is far from straightforward. To that end the applicability of the ILDM method is investigated. By categorizing the chemistry according to reaction speed, this method can identify the trajectory towards which the system will move on short timescales, and along which the system will subsequently evolve. This trajectory is a so-called manifold representing a lower dimensional space that fully describes the chemistry on sufficiently long time scales. After the complete chemistry has been realised in the global model, the aim is to apply the ILDM technique to obtain a leaner chemistry, so a comparison between the two chemistries can be made.