Glass fibers for communication applications like telephony and the Internet can be produced in several ways. The aim is to create a glass core with a higher refractive index than the surrounding material. One of the production processes is the creation of the so-called preform rod. Such a preform can be made by using the Plasma Chemical Deposition Process (PCVD) to form an inside-coated quartz tube, and then collapsing this tube. In the PCVD process, gases like silicon tetrachloride and oxygen are supplied in the hollow tube and subsequently heated by electromagnetic (EM) microwaves. This causes a deposition of a silicon dioxide (glass) layer on the inside of the tube. The microwave resonator that conducts the EM waves and surrounds the tube, moves along the axial direction of the tube. By adding trace gases into the gas stream, a deposited layer is doped, thereby changing its refractive index slightly. By depositing many of these layers, each with a slightly different refractive index, a smooth radial refractive index profile can be created. This profile can be related to the profile of the final fibre after collapsing and drawing. To better understand the PCVD process, a self-consistent model is created that simulates the behavior of the EM waves and the chemistry in the plasma. The Maxwell equations are solved on each grid cell of the simulated volume. As the propagation of the EM waves is strongly dependent on parameters like electron density, this needs to be done iteratively in combination with the chemistry and flow modules of the model.

The deposition plasma is formed inside a quartz glass tube that is covered by a microwave reactor. At one side of the tube an admixture of O2/SiCl4 is introduced with a net mass flow. The plasma creates SiO2 molecules in gas phase for this mixture among with many other species. These molecules are deposited layer by layer on the inner surface of the tube with distinct refractive indices. At the end of the deposition step a pre-form is produced to be used in the following steps of the optical fibre production.

Our initial strategy is to use a global (volume-averaged) model to investigate the chemical kinetics involved in the plasma. These types of models are quite simple to implement and provide an extensive information for a low computational cost. They also show quite good agreement with the experimental data as seen in the figure below.

In the figure the temporal resolution of atomic and molecular chlorine densities in and ICP Cl2 plasma are shown for a pulse-modulated power input. The circles, squares represent the experimental data from literature and lines are our simulation results.

The global models only provide volume-averaged plasma quantities. In order to acquire a spatial resolution and understand the role of the particle transport and the microwaves, we also constructed a 2-dimensional O2 plasma model that is self-consistently coupled to the microwaves. The plasma leaks out of the reactor for conventional reactor geometry and using these models it is shown that the reactor geometry can be altered to confine the plasma. In order to further understand the actual plasma formed of O2/SiCl4, a study of techniques is initiated to reduce the complexity of chemical kinetics. 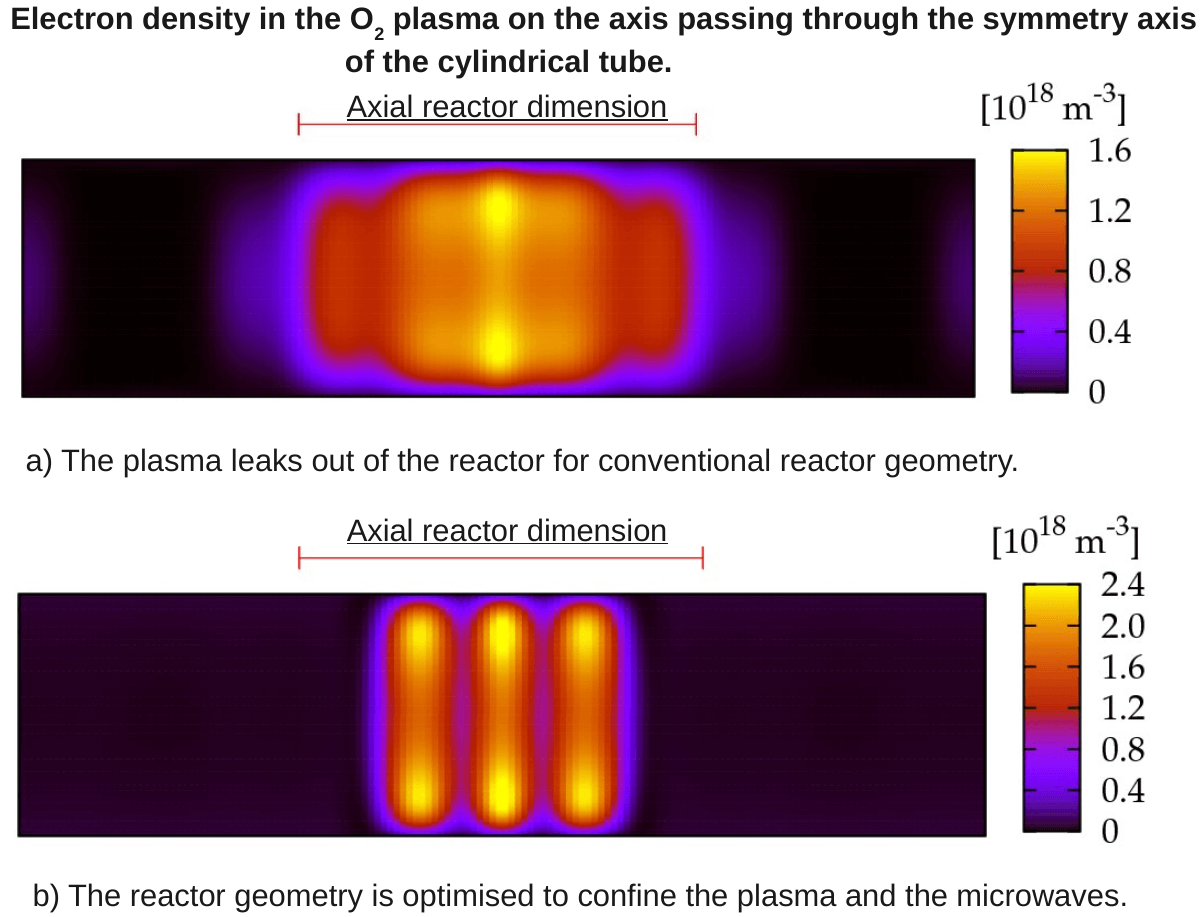